The most important part of creating good looking buildings in the BAT and gmax is the grid. The grid is, when it comes to things like dimensions, a real lifesaver. Before we start creating buildings, you must first know how to set up the grid, and how to use its power to the full extent. Especially if you’re working with the standard gmax without the BAT plugin, it’s important to set up the grid first.

SETTING UP THE GRID

Look in the bottom right corner of the gmax window. You’ll see the snap (magnet) icons. Right click on the left magnet icon, and the grid options window will pop up. On the Home Grid tab, set Grid Spacing to 1, and set Major Lines every Nth to 16; as one tile in SC4 is 16 grid units. We’ll call one grid unit one meter from now on.

Activate the grid line snap (left icon), and the angle snap (second left icon) by clicking on their icons. That is all there is to setting up the grid.

LEARNING TO WORK USING THE GRID

Before really starting to create new buildings, it would be advisable to learn how to use the grid; you’ll need the basic skills described below to complete some of the more complex tasks later on.

Zoom in untill you can see the smallest grid lines are visible (it should read ‘Grid = 1,0’ in the bottom corner). On the Objects Tab at the top of the screen, select the most basic object; a box. If you don’t see the objects tab, press ‘y’, or click Customize -> Show UI -> Show Tab Panel. Now, in the top view, draw a box that is approximately 10×10 grid lines. You’ll see that a blue cross automatically snaps to the grid, creating a box that is exactly 10×10; no more, no less.

Another important lesson is to learn how to move an object and still having it snap to the grid. Select the Move Tool at the top of the screen. There are two ways to move an object; one way is to use the arrow indicator (also known as pivot point). When hovering the mouse over one of the arrows, you can see that they light up. Drag the object along the highlighted axis. You’ll see that the object slides smoothly, and ignores the grid completely. This will make it very hard for you to line up objects later on. So isn’t there a way to make the object snap to the grid while I’m moving it? Yes there is!

First of all, undo the previous smooth movement by choosing Edit -> Undo Move. Click on one of the sides of the object itself (ignore the arrows), and drag the object along the screen. You’ll see that the object snaps to the grid. This will come in very handy later on.

Finally, the angle snap is another handy tool. Without angle snap; objects would rotate smoothly, again making it very hard to line them up when you want to rotate an object exactly 90 degrees. Click the rotate tool at the top of the screen, and in one of the viewpoints, click and hold the arrow you want to use as an axis for your rotation. Drag the cursor around and you’ll see the object rotates in steps of 5 degrees (this is the default value, you can change this by right clicking on the angle snap icon).

Walls are the most important part of your new building, so let’s start on those. In this example, I’ll be making a 3-story building. On the Shapes Tab at the top of the screen, select the rectangle shape. Shapes are also often referred at as Splines.

Now for the first wall of our new building; remember that every story of your building will be 4 or 5 meters high, so for a 3-story building your rectangle should be about 12 meters high, like in the screenshot. Now, while you have the rectangle selected, richtclick on it and choose Convert to -> Convert to Editable Spline. Now the basic shape of your wall is complete.

Now we’ll continue adding some windows to your wall. After all; an empty wall looks pretty bland. for this, we’ll select the rectangle tool again, and start drawing rectangles where we want our windows. Note that none of the rectangles are allowed to touch the outer spline, or it won’t cut a hole when we extrude the wall.

Of course, we also want windows on the other stories, so we clone (copy) the windows we already created. Select these windows, hold shift and drag them up. A window will pop up, prompting how you want to copy your windows. The three options are copy, instance or reference. Below is a small list of what these options mean:

Copy Copying means creating a new, independant objects that is exactly the same as the one you’re copying. This means that all the properties of this new objects will have to be stored in your saved file, and in your RAM. Copying an object will be necessary if you want to make changes to your new object.

Instance Instancing an object means creating an object that is exactly the same as the object you’re copying, but if you make a change to the original object, the instanced one will change too. This way the properties of only one of these objects has to be stored in your file and RAM; so this saves a lot of space. If you want two objects to be exactly the same; instancing is the way to go.

Now it’s time to actually create a 3D wall complete with thickness. First we’ll have to make the windows part of the main rectangle. Go to the modifiy tab (shown in the screenshot), and click ‘attach’. In the main viewpoint, click all the windows one by one, and you’ll see they get the same color as the main rectangle, meaning that they have been attached correctly. 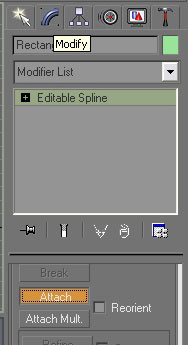 Now it’s time to extrude the wall. On the Modeling Tab, find the Extrude Modifier, and apply it to your rectangle by clicking on this modifier. You’ll see that your wall gets extruded by 25 units (this is the default). Of course, this is way too thick for our wall, so we set the amount to something more reasonable; like -0,4. remember that the minus sign is very important, as this will set the ‘anchor point’ (also called pivot point) to the front of the wall, making it easier to position it later on. You will now have a result similar to the screenshot; it already starts to look like a building, and thus far it hasn’t even been that hard. 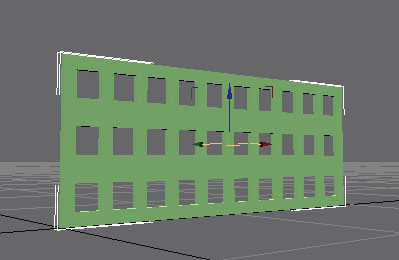 Even though we have now created holes for the windows; they still look a little too simple. Let’s change this. Create another rectangle shape in one of the window holes. This will be our window frame. Now, go to the modify tab, and change the properties to something similar as shown in the screenshots. Remember that Sides must be set to 4 and Angle to 45. Also remember to check the Display Mesh checkbox. 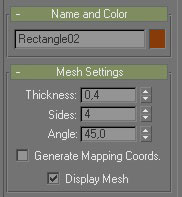 On the Modeling Tab, find the Edit Mesh Modifier. Click the red cube in the modifiying menu on your right. With this ‘select element’ mode enabled, select your frame. Its wireframe will light up red in the viewpoints. Now, scroll down in the modifiying menu, untill you can see the ‘Auto Smooth’ button. Click it, and you’ll see that your window frame is finished; the only thing left to do is to center it into our wall. 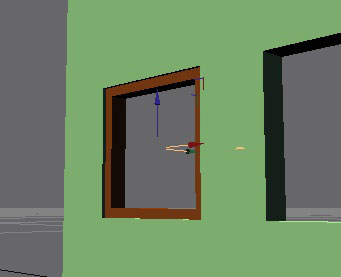 The last part to creating good-looking windows is adding glass. To do this, draw yet another rectangle in your window, and uncheck Display Mesh. On the Modifiers tab , click UVW Map Modifier, and you’ll see that the rectangle has become a plane. As with the window frame, use the Align Button to place the glass plane into the frame using the X, Y and Z checkboxes.

Now the only thing we have to do to complete this simple window is adding a equally simple material to it. To do this, start up the gmax Material Editor by clicking on its icon which can be found in the top right of the window. The icon itself looks like a red ball with a checker texture on its top. In the Material Editor itself, click New -> Standard. First we’re going to apply a material to the frame. Click on the coloured slot next to ‘Diffuse’ and choose the color you want for the window frame. When you’re done, drag the ball onto the frame, and the material will get applied.

For the glass material, create another new material by clicking New -> Standard. Again, choose a nice colour for your glass (preferably blue of course ). It’s optionally to make the glass transparent; you can do this by lowering the ‘opacity’ value to about 50. Again, drag the ball (and thus the material) onto the glass.

Transparent windows can look very attractive; but when to use them? Well, only use transparent windows if there’s really something to see inside; this means you really have to model some of the interior of the building.

Maxis themselves have said that they have only used transparency in a mere 10% of all of the buildings in SC4. This means that you can make good-looking buildings without using this feature.

Now that your window is done, you probably want to copy your window into the other holes, so you don’t have to repeat the same process over and over. To make this a little easier, we’re going to group the two components of the window, so gmax regards it as one object. To do this, select both the frame and the glass, and in the main menu, select Group -> Group. Call the new group ‘Window’, so it will be easier to recognize later on.

Hold shift, and drag the window into the other holes one by one. Since we want them to be the same, we’re going to instance the object. When you’re done, your wall should look like the one in the screenshot. 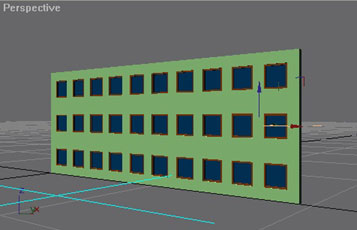 Sun Jun 6 , 2021
We’ve all seen it: the default region layout, created when you first make a new region. Many users prefer the default layout, but some aren’t content with the large plots in the corners, and small maps in the center. Most new SimCity 4 players don’t even know you can change […]